Skip to content
For COVID related questions please reach out to the facilities directly.
Where Excellence in Care is our Bottom Line. Call: 877-750-HEAL
Menu

For COVID related questions please reach out to the facilities directly. 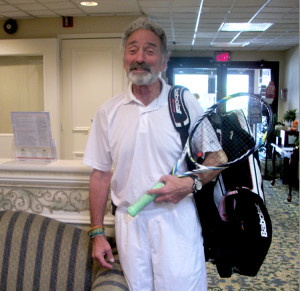 Mr. Grunstein came to Dellridge for subacute rehabilitation in April of 2013, after having hip replacement surgery. He came to us after learning of our 5 star status and seeing first hand the quality care that he witnessed.

One month after his surgery, he was actively back to playing tennis, a sport he has played for many years and feared he wouldn’t play again. Mr. Grunstein believes that it was the excellent rehabilitation program that got him back on his feet so quickly. “The physical therapists were very positive and supportive. They did not hold me back at all, which I really appreciated because I had to get it done and get back to being active.”

A year later, Mr. Grunstein is not only very active; he is a basketball and soccer referee for the Bergen County high school system, which entails a lot of running. He became a referee six months after his rehabilitation. He and his wife of 52 years are enjoying a happy and active lifestyle and spending quality time with their grandchildren. He looks and feels great.

Schedule a tour at one of our locations.

Send Us A Message:

Thank you for the wonderful care of my mother, P. Lewis. You all have been incredible during this time!

Let’s hope we are turning the corner, there and everywhere!

FAMILY OF CARING AT
MONTCLAIR

FAMILY OF CARING AT
PARK RIDGE

FAMILY OF CARING AT
RIDGEWOOD

FAMILY OF CARING AT
TENAFLY

FAMILY OF CARING AT
TEANECK